Blending is my cardio...

Is contour something that Kim Kardashian popularized? Is contour a method of makeup application that is a grandiose illusion? Can you contour without NARS, Hoola bronzer, and a Beauty Blender? The answer to all these questions is yes. Contour has been used for hundreds of years on the stage to show emotion on the faces of actors. It has been a popularized method of makeup application refined and introduced  by late makeup artist Kevyn Aucoin. Kevyn Aucoin was known to make a household name celebrity look like another celebrity from the past or even modern day. Many times unless a viewer looked twice one might mistake his makeup on Courtney Love as a photo of Marilyn Monroe. He did this through many tricks including the illusion of contour. Find his books here. (Seriously- they are best sellers, check em out.)

Contour is defined as an outline,

Especially one representing or bounding the shape or form of something. In the makeup world contour is known as defining and minimizing to standout or reduce the prominence of a feature.Bronzer defined areas include the sides of the nose, just below the cheekbones, the hairline, and the underside v of the chin. Highlighted areas include the brow bone, mid forehead, the top of the cheek bones, and the bridge of the nose. Contour gives our eyes depth of field when we look at another’s face. Our eyes pick up on light cast off by the highlighting shimmery makeup and find definition in the hairline from the bronzer. It can make your face look skinnier, nose appear straighter, cheekbones higher, and make a double chin seem to disappear. 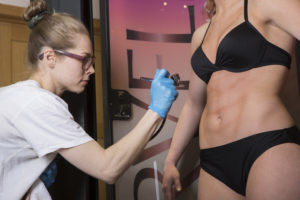 In the world of sunless tans we have taken contour one step further with semi permanent status and entire body coverage. In contour tanning we apply to the face the way you would with makeup: the hairline, the cheekbones, and jawline. When contouring a body abdominal muscles are defined, arms are strategically shaded to look slimmer, and the sides of the body including legs are more saturated to give the illusion of length when looking straight on. Spray tan artists apply solution with a small airbrush gun allowing for heavy concentration in small areas. These tans are perfect for photoshoots, beach vacations, and wedding nights. A contour tan will boost your confidence in a matter of minutes. We still think you should work out for your health, but leave the defining to the airbrush gun. If you can’t tone it, tan it.

We like to consider ourselves the authority on Minneapolis contour tanning. Even in the dead of winter you can spot our tans on vacationers, brides, and you know theres so many photoshoots going on while the snowfalls outside. Now if someone would just throw a pool party in January!